Gandalf Murphy and The Slambovian Circus of Dreams 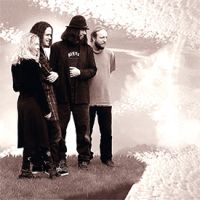 Formed in Sleepy Hollow, New York in the late 90s, Gandalf Murphy and the Slambovian Circus of Dreams is one of the best known and loved bands in their home state, singled out as Hudson Valley Magazine’s “Band of the Year” for the past 3 years. On stage they create an enchanting atmosphere, using traditional folk instruments, tasty electric guitar and the distinctive singing and songwriting of Joziah Longo. Citing influences as diverse as Hank Williams, Dylan, Bowie, Incredible String Band and early Pink Floyd, Longo describes the band’s music as “punk-classical-hillbilly-Floyd,” a mental rollercoaster of whimsical, thought-provoking songs. The Circus’ live shows are where the real magic comes down, earning them critical acclaim as well as a fiercely loyal following. Their previous studio release, “Flapjacks from the Sky” has been hailed as a masterpiece by many and continues to make a buzz internationally as a great Americana work of art. Their newest CD, “The Great Unravel” was released in August, 2008.

“Gandalf Murphy and the Slambovian Circus of Dreams is simply one of the finest American bands out there on the road.” –All Music Guide

“If somebody forced me to describe the Gandalf sound I would say: it’s as if David Bowie recorded ‘Hunky Dory’ with The Band in the basement of Big Pink”. –Reinhard Holstein, Glitterhouse Records, Germany

“Whenever I watch The Circus it reminds me to write and perform with my whole heart and soul.” –Dar Williams