Fred Eaglesmith and his Band 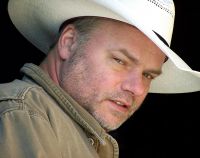 The Rosendale Cafe welcomes Fred Eaglesmith and his band to the mid-Hudson Valley.

Fred Eaglesmith is the son of an immigrant family from the Dutch province Friesland in Ontario, Canada. He was ten years old when he first saw Elvis on television. “I’m gonna do that,” he cried out. That day he wrote his first song.

Thirty-five years and thousands of songs later, Fred Eaglesmith is a singer and guitarist with a substantial group of extremely loyal fans, a celebrity in the small alternative country music scene. There’s not a single bar or club on the North American continent where he hasn’t performed yet, either solo or with his band “The Flying Squirrels.”

The “farm boy” of strict Reformed upbringing, blessed with great talent for songwriting, hasn’t strayed from his roots. He is a hero for those who recognize themselves in his lyrics: about poor farmers, racing trains, ramshackle trucks, and love affairs full of misunderstanding. He feels no need to become a star. Due to his intensive travelling, Fred has become an open-minded, self-willed and witty observer.