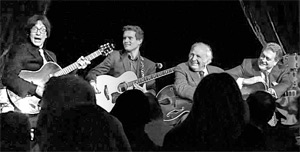 A legendary convergence of incomparable guitarists comes to the Cafe.

Frank Vignola is one of the most extraordinary guitarists performing before the public today. His stunning virtuosity has made him the guitarist of choice for many of the world’s top musicians, including Ringo Starr, Madonna, Donald Fagen, Wynton Marsalis, Tommy Emmanuel, the Boston Pops, the New York Pops, and guitar legend Les Paul, who named Vignola to his “Five Most Admired Guitar List” for the Wall Street Journal. Vignola’s jaw-dropping technique explains why the New York Times deemed him “one of the brightest…stars of the guitar.”

Vinny Raniolo has been on numerous recordings with Frank Vignola, Bucky Pizzarelli, Tommy Emmanuel, Tony Trishka, Matt Flinner, Ken Peplowski, to name a few. Vinny is also an experienced educator and has taught classes at Bowling Green University, Kent State University, Asiago Music Conservatory and others. He has also worked for many educational companies such as Mel Bay and Truefire.com. Vinny now tours the world with jazz guitar great Frank Vignola, and Australian guitar virtuoso Tommy Emmanuel. Vinny also works with many singer songwriters to arrange, record and produce their music.

Bucky Pizzarelli has played with the Vaughn Monroe Orchestra, the Benny Goodman Orchestra, the Tonight Show Band, Les Paul, Stephane Grappelli, Benny Goodman, and Frank Sinatra; easily making him a legend on the seven-string jazz guitar. Most recently he recorded with former Beatle Paul McCartney on his new Grammy Award winning album, Kisses on the Bottom. At the age of 88, he still tours and performs all over the world.

Ed Laub is a locally renowned guitarist and vocalist, whose style has been compared to a blend of Kenny Rankin, Chet Baker and James Taylor… all being accompanied by Bucky Pizzarelli! Ed says, “that’s not bad company to be associated with. They were amongst the artists to whom I listened to and was most influenced by. I guess I would say I am honored with that comparison.” Because of Ed’s talent as an accompanist, and the fact that he is one of the more accomplished 7 String guitarists, he is sought after by many of the top guitarists in the NYC metropolitan area to back them up, and adds a pianistic style that makes a duo sound more like a trio. Focusing mostly on the American Songbook genre, Ed also loves to perform the great Brazilian classics using a nylon 7 string guitar.