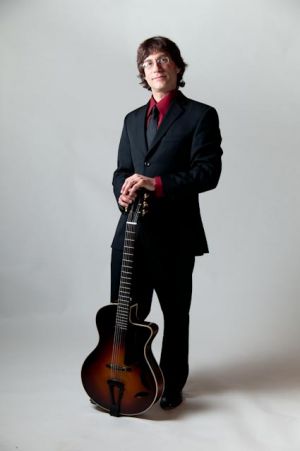 Frank Vignola is one of the most extraordinary guitarists performing before the public today. His stunning virtuosity has made him the guitarist of choice for many of the world’s top musicians, including Ringo Starr, Madonna, Donald Fagen, Wynton Marsalis, Tommy Emmanuel, Mark O’Connor, the Boston Pops, the New York Pops, and guitar legend Les Paul, who named Vignola to his “Five Most Admired Guitarists List” for the Wall Street Journal. Vignola’s jaw-dropping technique explains why the New York Times deemed him “one of the brightest… stars of the guitar”.

Grammy-nominated mandolinist Matt Flinner has made a career out of playing acoustic music in new ways. Whether it’s with his own Matt Flinner Trio or with Phillips, Grier and Flinner, the Frank Vignola Quartet, Darrell Scott, Steve Martin, the Ying Quartet, Tim O’Brien, Leftover Salmon or the Modern Mandolin Quartet, Flinner’s style and compositional ability have established him as one of the most accomplished and musically diverse mandolinists in the world.

“There is little in this world so awe-inspiring as witnessing total mastery of a musical instrument. Like seeing Yo-Yo Ma play the cello or Placido Damingo belt out an aria… sometimes a performer’s perfection can elevate a piece of music to heights beyond the realm of imagination. By all accounts, Frank Vignola conjures just that sort of magic with his acoustic guitar.” –Matt Cauthron, Intermission Magazine

“Flinner continues his reign as perhaps the most exciting and creative mandolin player on the scene today.” –Jazz Times
Frank Vignola