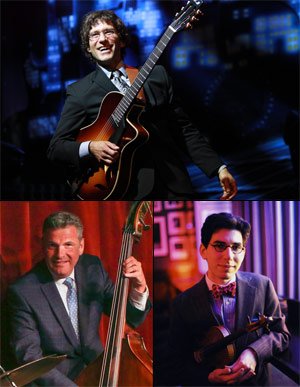 Frank Vignola and Aaron Weinstein perform violin and guitar duets in the style of, and reminiscent of, the great Venuti and Lang and Grappelli and Reinhardt.

Frank Vignola, born December 30th, 1965, is one of the most extraordinary guitarists performing before the public today. His stunning virtuosity has made him the guitarist of choice for many of the world’s top musicians, including Ringo Starr, Madonna, Donald Fagen, Wynton Marsalis, Tommy Emmanuel, the Boston Pops, the New York Pops, and guitar legend Les Paul, who named Vignole to his “Five Most Admired Guitarists List: for the Wall Street Journal.” Vignola’s jaw-dropping technique explains why the new York Times deemed him “…one of the brightest stars of the guitar”.

With over 1000 engagements in the last five years alone, Frank Vignola has become one of the most popular and sought after guitarists on the international music scene. His dynamic genre-spanning music has brought him to 14 countries on three continents “and still growing”, performing in some of the world’s most illustrious venues, including the Sydney Opera House in Australia, Carnegie Hall, The Palace of Fine Arts in San Francisco, New York’s Lincoln Center, and the world’s oldest indoor concert hall, Teatro Olimpico in Vicenza, Italy.

Often featured on National Public Radio, Frank Vignola has also become a familiar figure on Public Television, featured previously on three popular shows, including the heavily programmed Tommy Emmanuel and Friends. His own PBS special, “Four Generations of Guitar” produced by Peter Berkow, premiered in the 2015 season as part of the 13 episode series “Music Gone Public”, where they were joined by special guests Bucky Pizzarelli, Joe Craven and Tommy Emmanuel.

Martin Pizzarelli is a jazz bassist who has worked with brother John Pizzarelli for 25 years, and from there worked with 7-string guitarist Ed Laub, and 7-string guitar master (and father) Bucky Pizzarelli. For the past two years, Martin has been working and recording with Brazilian drummer Duduka da Fonseca (of Jobim fame) as well as with international Fingerstyle Guitar Champion Mark Sganga.

Aaron Weinstein has been called “the Groucho of the violin” by Tony Bennett and “a perfect musician” by jazz guitar legend Bucky Pizzarelli. Aaron “…is rapidly establishing himself as one of his instrument’s rare jazz masters.” (Don Heckman, International Review of Music).

As a featured soloist, Aaron has performed at Carnegie Hall, the Kennedy Center, Jazz at Lincoln Center, Birdland, Blue Note, and abroad at jazz festivals in England, France, Switzerland, Iceland, and Israel. Aaron has performed and recorded with an array of jazz icons including Les Paul, Bucky Pizzarelli, John Pizzarelli, Dick Hyman, Dave Frishberg, Jon Hendricks and Annie Ross, as well as musicians as varied as New York Pops conductor Skitch Henderson, and rock guitarist Jay Geils. He has written arrangements for vocalists including Christine Ebersole, Linda Lavin, and the Manhattan Transfer’s Janis Siegel. Additionally, Aaron is a respected mandolinist, widely regarded as one of the instrument’s leading exponents in the jazz idiom.

Note: This show was rescheduled from a week earlier because of snow.

“Vignola and Weinstein brought the house down with their rendition of Rachmaninoff’s 9th, arranged for violin and guitar.” –Nebraska Times
Frank Vignola