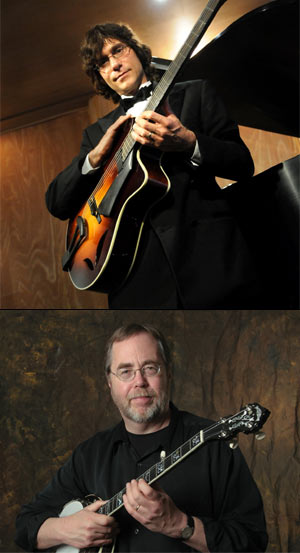 Frank Vignola is one of the most accomplished, multi-dimensional players walking the planet today. A monster player, composer and improviser, Frank plays proficiently in every genre, from jazz to bluegrass, and works with everyone and their brother. Frank’s pedigree is a mile long, but a quick Google will illustrate why he is considered one of the best on the planet. Whether he is featured on a Donald Fagen recording, a jam with David Grisman, as the late Les Paul’s right hand man, or leading his own groups throughout the years, he has proved himself to be in the elite creating his own unique sound.

Tony Trischka is perhaps the most influential banjo player in the roots music world. For more than 35 years, his stylings have inspired a whole generation of bluegrass and acoustic musicians. He is not only considered among the very best pickers, he is also one of the instrument’s top teachers, having created numerous instructional books, teaching video tapes and cassettes.

“This is String theory taken to a planet called ‘Down Home’. Be there for blast off.” –Cafe Guide

“For me, the standout musician in the ensemble was guitarist Frank Vignola, who can play more musically at ridiculous tempos than just about anyone I’ve heard. Vignola had the crowd in the palm of his hand for every solo.” –The Jazz Session Jason Crane, Tanglewood Jazz Festival

“The monstrous Frank Vignola… is one of the most vicious tremelo-pickers on the scene” –Jude Gold, Guitar Player Magazine

“Tony’s jovial wit and deep love of the banjo and acoustic music has infected and lifted me many times. Always a trailblazer, Tony plays the banjo like Tony Trischka. And many other people around the world would love to do the same.” –Jerry Douglas
Frank Vignola