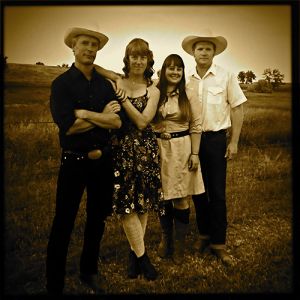 Credited for igniting the Old Time Renaissance in the Northwest, Foghorn Stringband continues to stand out as the shining gold standard for American Stringband music. Seven albums, thousand of shows, and over a decade of touring under their belts, it’s no surprise they have two entirely new generations of old-time musicians following their lead. Through all of this, they’ve never let the music grow cold; instead they’ve been steadily proving that American Roots music is a never-ending well of inspiration.

Today Foghorn Stringband features the intertwining harmonies of founding members Stephen “Sammy” Lind and Caleb Klauder, along with powerhouse vocalists Reeb Willms and Nadine Landry. They all bring a wealth of songs, instruments and traditions making them a festival favorite from coast to coast and around the globe.

This event was originally scheduled for April 4, 2015.

“Talk about a band that deserves more due. The Foghorn Stringband has quietly become one of the country’s longest-tenured underground stringbands, releasing now 7 albums, playing thousands of shows…” –Saving Country Music

“[Foghorn Stringband]… is among the finest practitioners of American old-time music on the globe, a string band whose faithful renditions of songs from bygone decades are no less than living, breathing history.” –Ned Lannamann, The Portland Mercury

“The Foghorn Stringband play old-time American string-band music – and they play it with all the passion, warmth, bite and fire of an illicit spirit. And I’m here to tell you that their latest album ‘Outshine the Sun’ is as close as you’ll get to treading the boards of genuine, smooth-distilled, double-rectified American roots music.” –Tom Franks, Folk Words