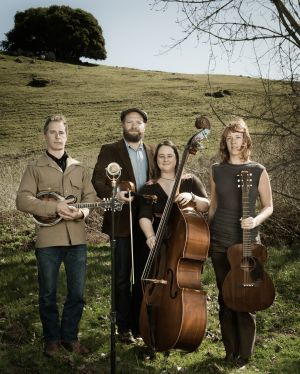 Foghorn Stringband is the shining gold standard for American stringband music, with seven albums, thousands of shows, over a decade of touring under their belts, and two entirely new generations of old-time musicians following their lead. Through all this, they’ve never let the music grow cold; instead they’ve been steadily proving that American roots music is a never-ending well of inspiration. From their origins in Portland, Oregon’s underground roots music scene, the core duo of Foghorn Stringband, Caleb Klauder, whose wistful, keening vocals and rapid-fire mandolin picking have always been the heart of the band, and Stephen ‘Sammy’ Lind, perhaps the best old-time fiddler of his generation, have spread the old-time stringband gospel all over the world, but they’ve also brought in new influences and inspirations from their many travels and fellow bandmates. Vintage country and honky-tonk became a staple of Foghorn Stringband thanks to Klauder’s intense passion for the music, and frequent visits to Louisiana have inspired the group to bring Cajun songs into the repertoire.

“There might not be more aptly named pickers at IBMA’s World of Bluegrass this year than the Foghorn Stringband. At Monday night’s showcase performance, the quartet’s fiddle tunes on steroids cut through the haze of the Nashville Convention Center ballroom and cleared the heads of listeners for the nontraditional acts to follow.” –Bluegrass Today, Sep 27, 2011