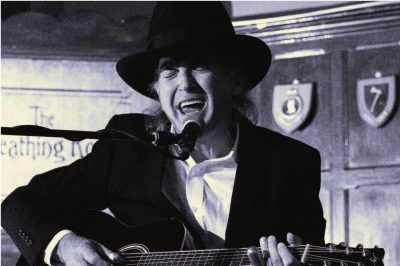 “If there’s a place for musical perfection, it’s wherever you’ll find Eric Sommer – A blistering acoustic style plus a variety of slide and open tuning formats will knock you for a loop…” writes Studdie Burns, Melody Maker/UK in 2016. “How one guy can do this so well is remarkable, but if you look a little deeper there’s a batch of road miles around this lad… and it all makes sense.”

Eric started his musical career in the Boston area under the eye of legendary promoter Don Law and was onstage at The Paradise Theatre in Boston for a record 40 appearances. He has been a regular player on many national and international tours and showcases, and worked in Europe for two years with Nick Lowe and acts Bram Tchaikovsky and Wreckless Eric; during this period Eric worked on Danish, Dutch, German and British rock stages, and returned to Boston and formed The Atomics.

As founding member of Boston’s legendary pop/new wave cult trio “The Atomics”, who toured non-stop with Mission of Burma, Gang of Four and The Dead Kennedy’s and were on the leading edge of a number of musical transformations, Eric never lost sight of his acoustic roots, returning to his heros and mentors often: David Bromberg, Steve Howe(YES), Duane Allman(Allman Bros.), Bert Yansch, Davy Graham, Robert Johnson. Mr. Sommer’s current project with power trio “The Solar Flares” shake up Chet Atkins and David Bromberg influences with those of Randy Travis and British Rocker Elvis Costello – a remarkable mix.

He has been on the road, in the studio, on stage, in front of or behind everyone from Jerry Douglas, Leon Redbone, John Mayall, Dr. John to David Bromberg, John Hammond, Jr., Little Feat, Andy McKee, too many to name…

Singer/songwriter Eric Sommer is an unbelievable intersection of improbable influences and experiences channeled into an amazingly diverse catalog and a résumé that reads more like a musical adventure novel than a series of career bullet points… – Cincinnatti City Beat, Cincinnatti, OH

How do you call this sidekick to unique personalities ranging from Nick Lowe to John Koerner an under achiever? This multi instrumentalist bad boy could easily be a superstar in his own right but he seems to be under the spell of Holy Modal Rounders… – Midwest Record, Lake Zurich, IL

Eric Sommer is an astounding guitar player, a virtuoso on acoustic and electric, and is a killer slide player and master of the finger-picking style. popularized by many of the Delta blues legends. His songwriting might best be described as… – Nashville Blues Society, Nashville, TN