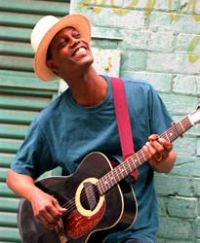 Eric Bibb, already enjoying success in Europe, is becoming a familiar face… and voice… in the U.S. acoustic folk-blues scene. His unique talent continues to draw critical acclaim around the world. Twice nominated for the W.C. Handy Awards and winner of the “Best Newcomer” title in the British Blues Awards, Bibb has been appropriately described as “discreetly awesome” and “a total original.” As his popularity escalates, earlier comparisons to legendary greats Ry Cooder and Taj Mahal are being replaced by quotes that speak to Bibb’s ability to “use standard blues ingredients to cook up something all his own.”

Bibb is a native New Yorker with deep roots in the American blues and folk tradition. He was inspired and influenced by Odetta, Richie Havens, Pete Seeger, Earl Robinson, Joan Baez, Bob Dylan, Judy Collins and many others.

Eric played the Cafe a few years ago, and we now heartily welcome him back to Rosendale.

“Eric Bibb is a man with a mission: to keep alive the tradition of 20th-century American Blues, folk and gospel music.” –Daily Telegraph (London)

“When Eric performs I study the audiences faces. They speak what I think I know: Eric Bibb is a soothsayer, a prophet; he provides tonic for the restless soul and ease to the aching heart.” –Cafe Guide