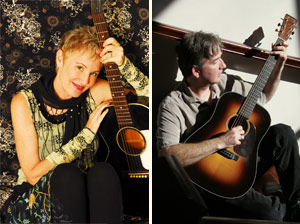 Eliza Gilkyson is a politically minded, poetically gifted singer-songwriter who has become one of the most respected musicians in Folk and Americana music circles. The daughter of songwriter Terry Gilkyson, whose songs were recorded by artists as diverse as Johnny Cash, the White Stripes, and Dean Martin; she was headed for a career in music at an early age.

Eliza has appeared on NPR, Austin City Limits, Mountain Stage, eTown, Sirius/XM, Air America Radio, and has toured with Richard Thompson, Patty Griffin and Mary Chapin Carpenter. She has been inducted into the Austin Music Hall of Fame alongside legends Willie Nelson, Townes Van Zandt, and Nanci Griffith; received a Grammy nomination for her 2006 CD “Paradise Hotel”, and is an ongoing winner of the Austin Chronicle’s various music awards; as well as being awarded the Folk Alliance’s Best Artist, Best Songwriter and Record of the Year.

Eliza’s music has always reflected her vivid vision of the world around her, full of joys and sorrows, each song a window into a life of struggle and triumph in a world she feels is “poised on the edge of moral, economic and environmental bankruptcy.”

Her latest release on Red House Records, “Roses at the End of Time” illuminates the issues, the inspirations and the agonies of our time, and the struggle to remain human in the midst of multi-dimensional crises.

The amazing Jim Henry will be joining Eliza for this show, with his brand of spare, delectable electric guitar.