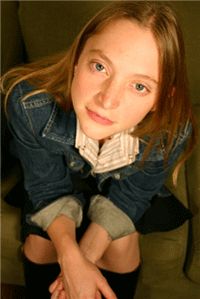 Boston-based artist Eilen Jewell puts her own beautiful stamp on old country, folk and blues and comes out sounding like the time-traveling, sweet-voiced lovechild of Bessie Smith, Gillian Welch, and The Be Good Tanyas.

Join her as she celebrates her new album Letters From Sinners and Strangers, as it climbs from #31 to #17 on the Americana radio chart, and to #4 on The Roots Music Report’s Folk chart.

“Eilen Jewell – say it ‘EE-lun’ – is the most exciting neo-trad songwriter to emerge from the Boston scene since Jake Armerding. Though only 25, the Idaho native sounds like she’s been writing songs for at least a couple of centuries. But on her starkly lovely new CD, “Boundary County,” she never wears her traditional trappings like an affect. The slow organic sway of her melodies, and the sensual way she rubs against the low end of her register, will remind some of Gillian Welch. Also like Welch, her writing is both intimate and vivid, classically framed and closely observed.” –Scott Alarik, http://BostonGlobe.com

“Keep an ear out for this young, soulful-eyed woman, originally from Idaho but now residing in the Boston area. The Narrows Center for the Arts has had her and her band open for several acts and the buzz she caused damn near upstaged the headliner. Eilen (same sound as feelin’) specializes in slow to mid-tempo original tunes that mix country, blues and folk into a tasty stew heated by her lazy, sultry vocals that wrap around you like 2 a.m…” –Stephen Hug, http://AmericanaRoots.com