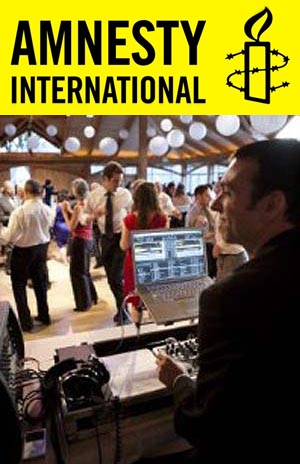 A benefit dance party for the Mid-Hudson chapter of Amnesty International.

Michael Wilcock, a DJ of Dave Leonard’s JTD Productions, will be spinning a mix of funk, soul, top 40 and classics to get all the different bodies grooving. Also a musician and musicologist, Michael steers his DJ sets through a dancing journey with plenty of soul and fun surprises!

There is a companion event the preceding Tuesday at the Rosendale Theatre, a documentary screening on worldwide human rights for women called “Half the Sky”, plus discussion and activism. That event is listed here: http://ActivistResource.org/18820

From the Mid-Hudson Amnesty International Chapter:

Amnesty International is a global movement of more than 3 million supporters, members and activists in over 150 countries and territories who campaign to end abuses of human rights. Our vision is for every person to enjoy all the rights enshrined in the Universal Declaration of Human Rights and other international human rights standards. Amnesty campaigns for those who need help are firmly rooted in the power of individuals working in support of others who need protection or support. We undertake research and take action aimed at preventing and ending grave abuses of these rights, demanding that all governments and other powerful entities respect the rule of law. It means we campaign globally and locally wherever we can make a difference. We are independent of any government, political ideology, economic interest or religion, and are funded mainly by our membership and public donations.

The Mid-Hudson Valley chapter of Amnesty International has sponsored a variety of events and fundraisers and has engaged in legislative lobbying with members of Congress in New York State. The main focus of our activism has been on closing Guantanamo Bay, getting both the domestic Violence Against Women Act and the International Violence Against Women Act passed, promoting immigrants’ rights through legislation like passage of legislation such as the Dream Act. In addition, we have become involved in maternal health and reproductive rights, and in stopping the violence against peaceful protesters in Turkey. We also do write-a-thons where we ask people in the community and at the university to write letters to free political prisoners… or pass specific legislation.

In order to achieve our goals, we have met with legislative aids from Senator Schumer’s staff, as well as with Congressman Gibson and Congresswoman Gillibrand’s staff. Three years ago we began screenings of an annual human rights film, followed by a discussion. In 2011 we showed a film articulating the struggles of undocumented immigrants in the United States. In 2013, we showed a film about a 17 year old Canadian citizen as he was detained and interrogated at Guantanamo Bay prison. Afterwards we had a Skype discussion and Q&A with an Amnesty expert on Guantanamo. This year we are showing a film about sexual violence against women, also followed by a discussion. We also had a fund raiser at the High Falls Cafe where we had a local band called Questionable Authorities play. In addition, the Mid-Hudson Amnesty International group had a petition signing event at the 2013 Mountain jam, where we collected over 500 signatures. Every year we send hundreds of letters to a variety of world leaders. The DJ Dance Party coincides with the annual Global Write-A-Thon and this year’s film.

100% of the door donations will go to the Mid-Hudson Amnesty International Chapter.