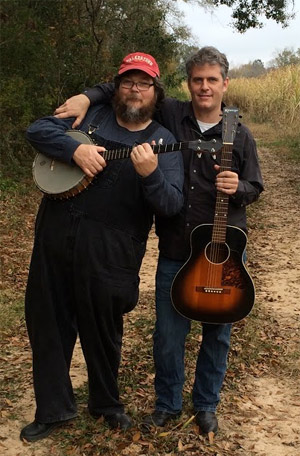 “At the Old-time Creole-Cajun Crossroad”

Dirk Powell has expanded on the deeply rooted sounds of his Appalachian heritage, to become one of the preeminent traditional American musicians of his generation.

In addition to acclaimed releases on Rounder Records, he’s recorded and performed with artists such as Loretta Lynn (playing several instruments on her Grammy-winning release Van Lear Rose), Sting, Jack White, Levon Helm, Jewel, T-Bone Burnett, Ralph Stanley, Linda Ronstadt and, currently, with Joan Baez. His ability to unite the essence of his culture with modern sensibilities has led to work with many of today’s greatest film directors, including Anthony Minghella, Spike Lee, Ang Lee, Victor Nunez, Steve James, and Edward Burns. As a founding member of Balfa Toujours (having studied under the great Cajun fiddler Dewey Balfa and married into the Balfa family) and a long time Louisiana resident, Dirk is equally at home with Cajun music.

“Dirk’s got great subtlety, tremendous feel, and he’s very loose and very modern, in the best sense of the word.” –T-Bone Burnett

“Now that’s the kind of fiddlin’ I like, right there…” –Loretta Lynn

Riley Baugus represents the best of old time American banjo and song. His powerful singing voice and expert musicianship place him squarely in the next generation of the quality American roots tradition.

Riley first came to music through his family. His father had left his roots in the mountains of North Carolina in the search for work, settling near Winston-Salem and bringing with him a love of old time music and a record collection that included, amongst others, the works of fellow North Carolinian Doc Watson, which touched the young Riley on a molecular level.

His family’s attendance at Regular Baptist church gave him early exposure to the unaccompanied singing that is a time-honored tradition for ballad singers throughout the Appalachians. Starting on the fiddle, Riley quickly moved on to the banjo, building his first instrument from scrap wood with his father.

Riley reached perhaps the most exposure of his career when he sang a capella for the 2003 Civil War film “Cold Mountain”.
Dirk Powell