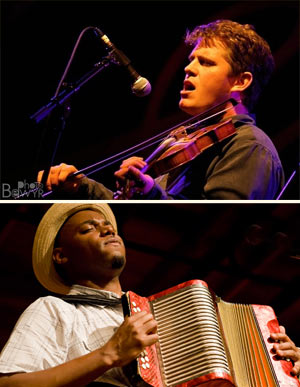 “At the Old-time Creole-Cajun Crossroad”

Dirk Powell has expanded on the deeply rooted sounds of his Appalachian heritage, to become one of the preeminent traditional American musicians of his generation.

“Dirk’s got great subtlety, tremendous feel, and he’s very loose and very modern, in the best sense of the word.” –T-Bone Burnett

“Now that’s the kind of fiddlin’ I like, right there…” –Loretta Lynn

In addition to acclaimed releases on Rounder Records, he’s recorded and performed with artists such as Loretta Lynn (playing several instruments on her Grammy-winning release Van Lear Rose), Sting, Jack White, Levon Helm, Jewel, T-Bone Burnett, Ralph Stanley, Linda Ronstadt and, currently, with Joan Baez. His ability to unite the essence of his culture with modern sensibilities has led to work with many of today’s greatest film directors, including Anthony Minghella, Spike Lee, Ang Lee, Victor Nunez, Steve James, and Edward Burns. As a founding member of Balfa Toujours (having studied under the great Cajun fiddler Dewey Balfa and married into the Balfa family) and a long time Louisiana resident, Dirk is equally at home with Cajun music.

Spearheading the emerging generation of Creole musicians, Cedric Watson is a fiddler, vocalist, accordionist and songwriter of enormous talent and potential.

“To propel our Louisiana culture into the future seems to be quite a task, but if one lives for the music as Cedric does, the path seems effortless. These songs may well be early brushstrokes of a life’s worth of possibilities, not only for himself, but also for the identity survival of a culture.” –Michael Doucet

Injecting a healthy dose of his own personality and ingenuity, Cedric has been exciting an ever-broadening audience with his unique take on traditional Creole music, and with his new compositions that expand the genre while still respecting its roots. In the few years since he assumed the role of bandleader, all three of his albums have been nominated for Grammy Awards.

Moving with ease between fiddle and accordion, and adding his strong blues-inflected vocals, Cedric’s creative style and obvious joy in playing make him an engaging and exciting performer.
Dirk Powell