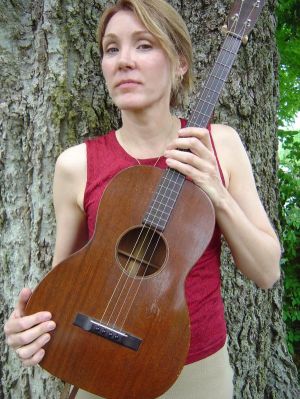 Diana’s music is informed by the themes that have run through her life… love, loss, and redemption… bringing to mind both Emily Dickinson and Loretta Lynn in the same breath. From the mournful lament of a dance hall girl, to the stomping melodic rant of a young woman’s burial instructions, each of Diana’s original songs from her latest CD, My Remembrance of You, draws life from the rich cross currents of old timey, country blues and mountain music.

Adopted as an infant and raised in New York, Diana left home at the age of 15 in search of her roots. Unlike most of her friends, Diana was attracted to the music of Johnny Cash and Patsy Cline, as well as contemporary artists Emmylou Harris and Dolly Parton. It wasn’t until she was reunited with her birth family and the music of the Eastern Tennessee hills some years later, that she discovered why that music had always moved her.

“When Diana Jones went in search of her birth family, she not only found them in East Tennessee, she also found her voice – as a writer and a singer. There’s an authenticity to her stories and her singing that is truly special.” –John Platt, WFUV

“Jones is on the verge of a critical breakthrough. Increasingly compared to the likes of Iris DeMent and Gillian Welch, Jones just might be the best American songwriter most people have never heard of.” –Chicago Tribune

“Diana Jones writes songs which she sings in such a haunting high lonesome that one can’t help but wonder if she isn’t the lost daughter of the Carter Family.” –Ann Patchett, New York Times

“Diana Jones, like Gillian Welch and Iris Dement, has the uncanny ability to write original songs that sound like they originated a couple centuries ago in some backwoods West Virginia holler… she can sit and sing for a spell on my front porch any time.” –Paste Magazine