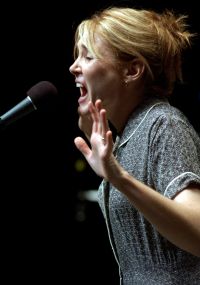 Diana’s music is informed by the themes that have run through her life… love, loss, and redemption… bringing to mind both Emily Dickinson & Loretta Lynn in the same breath. From the mournful lament of a dance hall girl, to the stomping melodic rant of a young woman’s burial instructions, each of Diana’s original songs from her latest CD, My Remembrance of You, draws life from the rich cross currents of old-timey, country blues and mountain music.

Adopted as an infant and raised in New York, Diana left home at the age of 15 in search of her roots. Unlike most of her friends, Diana was attracted to the music of Johnny Cash and Patsy Cline, as well as contemporary artists Emmylou Harris and Dolly Parton. It wasn’t until she was reunited with her birth family and the music of the Eastern Tennessee hills some years later, that she discovered why that music had always moved her.

After establishing a solid folk career in the late 90’s in the fertile Austin music scene, Diana returned to the northeast seeking time to heal from the loss of her beloved grandfather, Robert Lee Maranville. As a young man he had performed with Chet Atkins, among others. It was during this time of healing and isolation that Diana started writing from a deeper place, and after some serious wood-shedding, she emerged with some of the most honest songs of her life.

“There’s an authenticity to her stories and her singing that is truly special.” –John Platt, WFUV