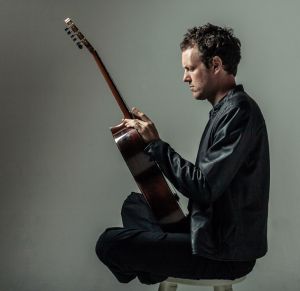 Derek has traveled throughout the world as a soloist, and collaborated with kora maestro Toumani Diabate at the Acoustik Festival Bamako in Mali, and with guitar legend John Williams at London’s Globe Theatre. His recent work incorporates transcriptions and improvisations based on the work of such African composer/performers as Toumani Diabate, Ali Farka Tour�, Ballak� Sissoko, Salif Keita and Fanta Sacko of Mali; as well as his own compositions based on the music of the Western Cape of South Africa. His newest recording, Libraries on Fire, explores kora duets on solo guitar.

“The result is astounding… It’s hard to imagine a more impressive and passionate rendering of Malian music on classical guitar.” –Afropop Worldwide

“…his playing has a depthless beauty, which does full justice to the complexity of Toumani’s compositions… a staggering achievement on solo guitar.” –Songlines Magazine

“one of the most atmospheric recordings of guitar music, of any kind, that I have heard” –Classical Guitar Magazine