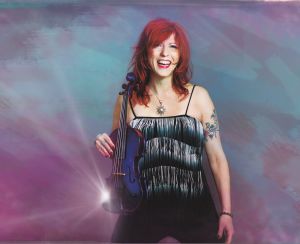 It’s no secret that Deni Bonet can rock a violin like nobody’s business… or that she writes memorable songs that make you want to listen again and again and again. Dynamic and personable, she makes any venue intimate and cozy. She is, quite simply, a musical total package: a streak of aural and visual lightning, wielding a violin bow. At the same time, don’t expect to sit back on your laurels and just watch – a Deni Bonet show is an experience in which you’d better be ready to have fun and participate, as anyone who has seen one of her passionate, powerful live performances will attest. Whether fronting her own band of outstanding players, or collaborating with anyone from Cyndi Lauper to R.E.M. to Sarah McLachlan, Deni has gained a reputation as one of the most exciting, dynamic and entertaining performers on the live circuit.

Although classically trained, Deni quit the classical world because she hated having to wear black and sit still. She was an original cast member of National Public Radio’s premier music show, Mountain Stage; performing in her own right and accompanying guests like Richard Thompson, Warren Zevon, and the Indigo Girls; before leaving the show to form her own band.

Bright Shiny Objects, released on Zip Records (distributed by Sony RED), is a departure from her usual song-based material; this album is entirely instrumental. Deni has spent the past year and a half writing and recording with a Who’s Who of some of the best musicians on the planet – including Steve Gaboury (Cyndi Lauper), Liberty DeVitto (Billy Joel), Richard Barone (Bongos), Shawn Pelton (SNL), Will Lee (Letterman), Matt Beck (Matchbox Twenty), Steve Holley (Paul McCartney), Graham Maby (Joe Jackson), Ben Butler (Chris Botti), Mike Visceglia (Suzanne Vega), Jack Daley (Lenny Kravitz), and the list goes on and on.

She has performed at Carnegie Hall, the United Nations, on the Great Wall of China, and performed at the White House for President Obama, the First Lady and Vice-President. The October performance of her own songs with the Baylor Symphony Orchestra will mark the debut of the “Deni Bonet: Orchestral” project.

“Bound to be one of the standout records of 2017, I’m calling this early as one of my favorite records of the year.” –Paste Magazine

“Just finished listening to this masterpiece. The playing is so damn rich and fine and tempered and textured; the melodies are strong and enveloping.” –PopDose Magazine

“While she loves to have fun on stage, there are places in her show where she digs down deep and comes out with breathtaking violin solos worthy of the finest classical concert halls” –Sarah Craig, Executive Director, Caffè Lena, (the US’s oldest and most prestigious coffeehouse)