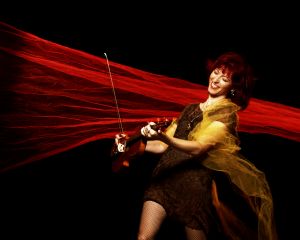 Deni Bonet is a pop/rock singer/songwriter and classically trained violinist who traded in her black recital clothes for a pair of go-go boots and an electric violin. She quit the classical world early in her career because she hated having to wear black and sit still. Deni has recorded or performed with R.E.M., Sarah McLachlan, Cyndi Lauper, Daniel Lanois, Scissor Sisters, and Robyn Hitchcock, among many others. She was an original member of the cast of the nationally syndicated radio show, Mountain Stage; singing and performing in her own right and accompanying guests on the show… anyone from Richard Thompson to the Indigo Girls to Warren Zevon to Allen Toussaint. Deni left the show to pursue a solo career, with a mission to prove that there is more to the violin than concertos and hoedowns! Her latest obsession is with the ukulele which has brought her an endorsement with Kala Ukuleles, and a recent headlining spot at the NY Ukulele Festival.

Deni has just released a new CD with producer Richard Barone (of the Bongos). Making guest appearances on the new record are Peter Buck of R.E.M., Steve Holley of Wings, and John Wesley Harding, among many other notable musicians. Her video of the song “One in a Million” recently went viral on YouTube and can be viewed at http://bit.ly/YJNGA7

Performance highlights for her own band include showcases at CMJ, SXSW, NXNE, Bumbershoot and the Yapi Credi Festival In Turkey. Her band performed at Lilith Fair to amazing reviews, with most reviewers picking her as the standout act on the outside stages. They have become an in-demand act, headlining various festivals, performing arts centers, clubs, and colleges along the Eastern seaboard. Deni’s music has been featured on HBO, NBC, American Airlines, in several film and modern dance projects, and has been described in the Wall Street Journal as like “Sheryl Crow meets the B 52’s” and in the Music Paper as like “Debbie Harry fronting the Dave Matthews Band”.

She tours regularly in the U.S. and has opened for Patti Smith, The Gin Blossoms, Lisa Loeb, Cracker, Midnight Oil, The Tubes, Marshall Crenshaw and Fairport Convention, to name a few.