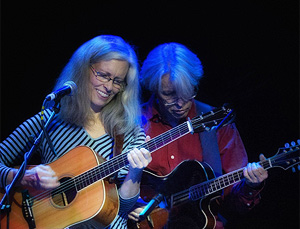 A collaboration of two unique and deeply affecting musicians. Legendary fiddler and multi-string master Darol Anger here focuses his talents in service of the singer-songwriter’s art. Emy Phelps is a standout artist in a large field: a prolific songwriter with a riveting voice, plumbing the deepest emotions. These two musicians amplify each other’s special abilities to convey deep emotional resonance, and a bit of hot pickin’. They already have two CD releases and numerous international music festival performances to their credit.

Darol Anger is a fiddler, composer, producer and educator; at home within a number of musical genres, some of which he helped to invent. Exceptional among modern fiddlers for his versatility and depth, Anger has helped drive the evolution of the contemporary string band. He managed to do this through his 40-year involvement with numerous pathbreaking ensembles, such as his Republic of Strings, the Turtle Island String Quartet, the David Grisman Quintet, Montreux, his duo with Mike Marshall, and others. He has performed and taught all over the world with musicians such as David Grisman, Dr. Billy Taylor, Bela Fleck, Bill Evans, Edgar Meyer, Bill Frisell, Marin Alsop and the Cabrillo Orchestra, Tony Rice, Tim O’Brien, the Detroit Symphony, Aoife O’Donovan, Mark O’Connor, and Stephane Grappelli. Today Darol can be heard on NPR’s “Car Talk” theme every week, along with Earl Scruggs, David Grisman and Tony Rice. He has recorded and produced scores of important recordings since 1977, is a MacDowell and UCross Fellow, and has received numerous composers’ residencies and grants. Darol has been a featured soloist on dozens of recordings and motion picture soundtracks. He is an Associate Professor at the prestigious Berklee School of music.

Emy Phelps is a remarkable vocalist/guitarist and a star in the Pacific Northwest, who put her career on hold to raise four kids, and is now back in the game. She was a founding member of Brian Ransom’s Ceramic Ensemble, touring internationally from 1980-1987. As a member of the ensemble she did research on indigenous music in Peru. She obtained a degree in education, teaching at elementary and middle schools and successfully raising children, but now her public work continues as a recording artist, a member of The Furies, and as a duet with Darol Anger. In addition to her current release, “Look Up, Look Down”, she is the featured vocalist on the new Furies release, and has a previous recording entitled “As It Should Be” on Sweet Mercy Records. She has participated in recordings by Patrick Brayer, Chris Darrow, Norma Tanega, Taarka, and Duke McVinnie.