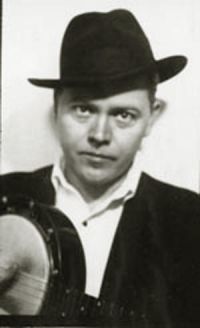 A true entertainer and raconteur, C.W. Stoneking plays guitar like a demon, wears natty threads, hollers like a 1920s tent show blues shouter and mutters to himself onstage. Drawing inspiration from influences that include pre-war blues, hillbilly, old jazz and prison work songs, the idiosyncratic C.W. Stoneking is a revelation and a delight, invoking the spirit of the 1920s Deep South blues like he’s just been beamed in from the past like a lost time traveler.

Based in Melbourne, Australia, Stoneking is an inimitable singer/songwriter, evoking an original and diverse hokum style, using his trusty steel bodied dobro, his tenor banjo and a three piece Primitive Horn Orchestra. His debut album, King Hokum, was ARIA-nominated for Best Blues and Roots Album (2007), and winner of the AIR Award for Best Independent Blues & Roots Release (2007).

“King Hokum is a delight. It’s actually like delta blues have just been created by a bloke in Australia. This is real music, real blues and musicianship that can only come from being able to really play. The stand out album of the last half decade” –Tim Ritchie, ABC Radio National

“‘Goin the Country’ as 1930s style piano and guitar blues duet… made me sit bolt upright – if the track had some snap, crackle and pop in the background I would have sworn it was a previously unknown 1930s blues recording… outstanding. Get your copy. G’wan – amaze your chums!” –Blues & Rhythm (UK) February 2008