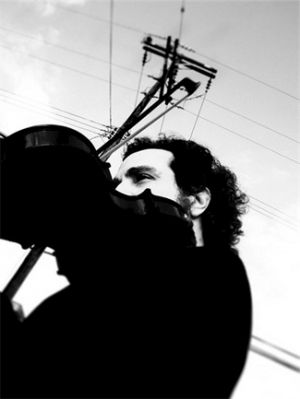 For 25 years, and with no sign of slowing, violinist Chris Murphy has made a living by writing, performing and recording original music. For Murphy, the path forward is charted by looking backward, to the troubadours and minstrels of ages past. “In another era,” he says, “I would have played square dances. I would have been a court musician in Versailles in the 17th Century, or a violinist in a circus orchestra.”

Born into an Irish-Italian family near New York City, Murphy was surrounded by the disparate and eclectic sounds of his neighbors’ traditional music. “I heard and was influenced by everything – from Italian-mandolin music, to bluegrass and folk, to Latin, to Turkish, to Indian…”, he says. “My real hero was David Lindley. Hearing him play fiddle and lap steel with Jackson Browne – that kind of esoteric, enigmatic soloing over songs is originally what I loved.”

Now based in Los Angeles, Murphy earns his living by teaching – guitar, mandolin and violin – working on music for films, and, mostly, by performing his work for audiences.

To wit, Murphy has amassed a deep catalog of solo and collaborative albums and made cameo appearances on records by Har Mar Superstar and The Dandy Warhols, among others. In the last year alone, Murphy has written and recorded six new albums in a vast array of styles. Chris has also been featured on television programs such as �Til Death and The Ellen Degeneres Show; his diverse and chameleon-like talents make him a sought-after composer and collaborator for film and television.

Murphy finds his element on the stage, where spontaneity and improvisation reign. “To me, the music is liquid, and I’m looking to have some kind of experience,” he says. “I’ll twist and turn and hammer and mold and shape cut and paste the music to do that. We’ve never done a song the same way twice.”

“Find Murphy – the Los Angeles fiddle master foraging for lyric themes in the underbelly of folk-rock tradition, turning up gems of Dylanesque guile, Tom Waits-approved gothic cabaret, and the kind of emblematic story-songs that have sustained songwriters from Neil Young, to Richard Thompson and Old Crow Medicine Show. ‘Surface to Air’, Murphy’s American pastiche, suggests that rambling souls are just as likely to spin their weathered tales in LA as they are in Dixie.” –James Rotondi, Brooklyn, NY