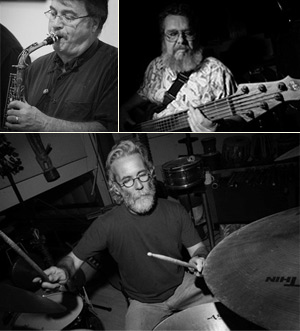 CBC 3 have been together for over 4 years, performing on both coasts (NY & CA). They perform original compositions crafted by Bob Shaut, saxes; and Charlie Kniceley, bass; with much collaboration from Chris Bowman, drums.

Bob Shaut is a Hudson Valley Native who was a music educator for 39 years in Poughkeepsie and Kingston. Never relenting on his ambition to play Saxophone and compose original compositions, he has been an active performer and band leader for that entire period. Now retired from teaching, he began collaborating with Charlie Kniceley, a 30 year member of Bob’s flagship group Sax Life. Their partnership was originally a duet, simply bass and sax, but it soon became evident that another voice was needed. That’s when they approached Chris Bowman to play drums. Charlie had worked with Chris since 2004, recording and performing with Mr Rusty, a fusion group lead by Danish guitarist Nat Russell. After Chris joined with Bob and Charlie, the new trio proved to be the right thing to do. Chris is from North Carolina and Charlie is from Ohio, so although they have lived in the Hudson Valley for many decades, the different parts of the country come together in the music.

Bob Shaut is currently playing saxophone with the CBC Trio, The Big Bang Big Band, and has recently been featured soloist with Ars Choralis as well as Professor Louis and the Cromatix. His feature group is Sax Life, a sax quartet with bass and drums, which recently released a CD comprised of Bob’s compositions, “The Saxophone and the Drum”. He has composed a new piece called “Valley Views and Bridges: Impressions of the Hudson Valley” for the Hudson Valley Saxophone Orchestra. The piece is being premiered on January 16 at Shenandoah University, Virginia. Bob also performs and arranges with daughter Andrea for the Hudson Valley Recital Project, and works with son Dan in the Shaut Jazz Project at http://www.shautjazz.com

After living in southern Ohio near Cincinnati, and southern California near LA in the ’60s, Charlie Kniceley migrated to the Hudson Valley to become involved in the very active music scene. Since that time he has performed/recorded with many fine entertainers including Rashid Ali, Ed Summerlin, Connie Francis, Al Martino, Ron Carter, Honi Coles, Jimmy Eppard, Brenda Buffalino and the Hudson Valley Philharmonic Orchestra. He has led several of his own bands, and recorded in NYC, London, and Zurick. Deciding that he no longer wanted to travel, he now works full time with Michael Tobias at MTD, producing some of the world’s finest electric basses, and performs with some the Valley’s leading musicians… including the CBC Trio.