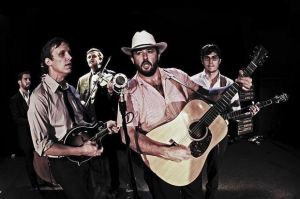 The band cannot make it up from the Carolinas due to the large East Coast storm, so tonight’s performance is cancelled. We hope to reschedule the band for another time. We apologize for the inconvenience.

Town Mountain’s hard drivin’ bluegrass sound, tight harmonies, and stellar in-house songwriting have become the band’s trademark. They light up the stage with their honkytonk edge and barroom swagger, featuring a Jimmy Martin-style bounce and confidence that is countered at times by a laid-back John Hartford-esque groove.

The past two years have pushed Town Mountain into the upper tier of acoustic bands, and they have found themselves at some of the most prestigious festivals in the country… such as MerleFest, Grey Fox, Rockygrass, Suwannee Springfest and the Targhee Bluegrass Festival… earning them a nomination for IBMA’s 2014 Emerging Artist of the Year, a natural follow up to their two 2013 IBMA Momentum Awards.

With the release their first official live album, Town Mountain: Live At The Isis in August 2014, fans and critics alike celebrate the high energy of their one-of-a-kind live show. With plans for the studio in early 2015, Town Mountain is certain to continue their ascent in the world of roots music.

Town Mountain includes Robert Greer on vocals and guitar, Jesse Langlais on banjo and vocals, Phil Barker on mandolin and vocals, Bobby Britt on fiddle, and Nick DiSebastian on bass.

“Sometimes you can’t help but notice the growth of an enterprise… Sporting a sound rooted in string band tradition, but with a fearsome instrumental drive that makes its music anything but a museum piece, the band has watched its audiences grow younger, larger and more feverishly enthusiastic.” –Walter Tunis, Kentucky.com

“There was such an instant energetic spirit felt from this band, that made you want to kick up your heels and promenade around the square at a barn dance all night long.” –Tanya Vega, Southside On The Town Blog