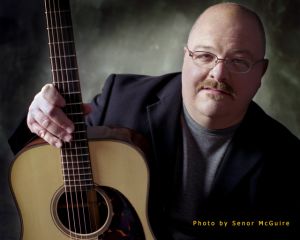 Please Note: This show has been canceled due to Jim’s inability to travel north due to the hurricane. Please note that the Rosendale Cafe is open, now that power has been restored.

The rest of this listing remains here for posterity…

To listen to Jim Hurst is to be amazed by his tasteful and flawless performances. Perfect timing and tone and his unusual picking style has enchanted guitar players from the novice to his peers. It’s no surprise, then, that his musical mastery began with a musical upbringing paving the way for a winding and varied career path.

Born into a musical family, Jim spent his youth playing guitar under the influences of flat-picking greats Tony Rice, Doc Watson, George Shuffler, and Clarence White. But the finger-style playing of Merle Travis, Chet Atkins and Jerry Reed was the “turn in the road” for Jim. This amalgam of impact defined his technique.
Using his early years to hone his style, Jim’s guitar work and harmony vocals for Holly Dunn’s Rio Band brought his talent to both the national and international stage. Then in 1992, going electric, he played guitar with Trisha Yearwood, touring extensively and appearing on numerous radio and television shows. He also performed with Travis Tritt, the McCarter Sisters and Sara Evans, whose 1998 RCA release No Place That Far features Jim’s vocals and acoustic guitar work.

“Jim Hurst is one of the most versatile and tasteful guitar players I know. Whether he’s flailing the rhythm for an old time fiddle tune, laying down a funky groove, or finger picking a beautiful ballad, his playing is both impeccable and creative. Accompanying this instrumental virtuosity is a rich and expressive voice with a surprising range.” –Mark Schatz