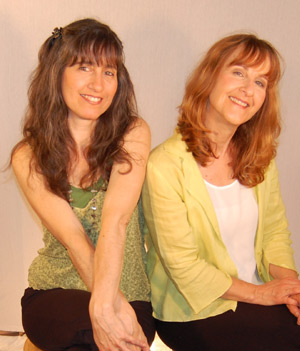 Due to illness, this Valentine’s Day concert has been canceled. We very much regret this, and hope you will understand.

Amy Fradon and Leslie Ritter are back to the Cafe for a delightful Valentine’s evening of the most luscious harmonies you will ever hear. Their unique and magical blend of voices and vocal arrangements won them widespread critical acclaim and two recording contracts, as well as numerous recording sessions for artists such as Livingston Taylor, Happy and Artie Traum, and Ed Sanders and the Fugs. Amy and Leslie sing a broad span of music, from folk and country to blues and gospel, backed up by the elegant work of Cathie Malach on keyboard and Helen Avakian on guitar. If you have not yet heard Amy and Leslie, your heart will surely sing when you spend Valentine’s Day eve with them at the Cafe, for an intimate and truly memorable performance of sensational, vocal music.

Due to the expected high turnout for this event, and the Cafe’s first-come-first-serve policy, audience members are encouraged to come as early as possible for seating.
“An acoustic duo from the Hudson Valley reunited… and played like they had never been apart a day …Amy & Leslie’s heavenly blend was always their calling card and in Albany, that was not diminished one iota. Looking casual and comfortable… it was simply captivating.” –David Malachowski, on Amy and Leslie’s reunion performance in Albany, from http://TimesUnion.com/