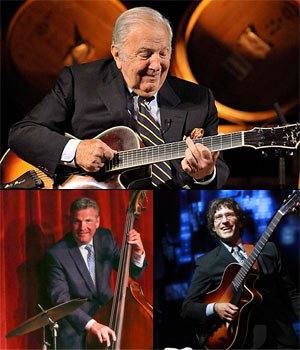 Please join us for a very special event at the Rosendale Cafe. The first ever Jazz Brunch featuring the great jazz guitarist Bucky Pizarelli, with Martin Pizzarelli on bass, and Frank Vignola on guitar. This is a stellar line up of the finest jazz artists active today.

The cafe will be serving from their regular and brunch menu. The performance is from from 12:00pm-2:30pm, with doors opening at 11:00am.

Bucky Pizzarelli – Born in Paterson, NJ in 1926, Bucky is a world-renowned jazz guitarist. His career spans over 70 years, from the Vaughn Monroe Orchestra to the Johnny Carson Tonight Show. Hundreds of jazz concerts worldwide, including White House performances with Benny Goodman, Frank Sinatra, and Claude “Fiddler” Williams, with Presidents Reagan and Clinton add to the list.

His numerous worldwide tours also included performances with practically every jazz legend, such as Stephane Grapelli, Slam Stewart, Tal Farlow, Rosemary Clooney, Zoot Sims, Benny Carter, Michael Feinstein and Charlie Byrd, to name a few. He has hundreds of jazz recordings with every major jazz great, including his own solo albums and work with his two sons, John and Martin Pizzarelli. He is on the soundtrack of Woody Allen’s Sweet and Lowdown and has appeared on PBS with Les Paul and Tal Farlow, The New Jersey Jazz Guitars (Filmed at Rutgers University).

Last year, Bucky became one of the very first musicians in New Jersey to have two of his guitars, along with a recorded history of his lifetime in music, inducted into the Smithsonian Institute in Washington, D.C. In 2011 Bucky was inducted into the New Jersey Hall of Fame, and in 2012 recorded with Paul McCartney on his latest Grammy Winning Album, Kisses On The Bottom.

Martin Pizzarelli is a renowned double bassist known for his work with his father, legendary guitarist Bucky Pizzarelli; and brother, guitarist and singer John Pizzarelli. He grew up in Saddle River, NJ, where at a young age he became accustomed to weekly visits from Benny Goodman, Teddy Wilson, Zoot Sims, Clark Terry, Sonny Stitt, and Ray Brown. Martin, along with his brother and pianist Ray Kennedy, famously opened for Frank Sinatra’s world tour in 1993. Since then he has endured a remarkable tour schedule of roughly 200 dates per year throughout all corners of the globe. TV appearances include Jay Leno, David Letterman, Conan O’Brien; with venues ranging from Carnegie Hall to the Blue Note Jazz Club. He has worked with the Boston Pops, New York Pops, San Diego Symphony, Dallas Symphony, and New Jersey Symphony orchestras. Martin has also often worked with jazz pianist Monty Alexander and Daniel Jobim, the grandson of Antonio Carlos Jobim. In 2004, he released and recorded his own trio CD with Bucky Pizzarelli and Ray Kennedy, and has appeared as a sideman on over 30 albums.

Frank Vignola, born December 30th, 1965, is one of the most extraordinary guitarists performing before the public today. His stunning virtuosity has made him the guitarist of choice for many of the world’s top musicians, including Ringo Starr, Madonna, Donald Fagen, Wynton Marsalis, Tommy Emmanuel, the Boston Pops, the New York Pops, and guitar legend Les Paul, who named Vignole to his “Five Most Admired Guitarists List: for the Wall Street Journal.” Vignola’s jaw-dropping technique explains why the new York Times deemed him “…one of the brightest stars of the guitar”.

With over 1000 engagements in the last five years alone, Frank Vignola has become one of the most popular and sought after guitarists on the international music scene. His dynamic genre-spanning music has brought him to 14 countries on three continents “and still growing”, performing in some of the world’s most illustrious venues, including the Sydney Opera House in Australia, Carnegie Hall, The Palace of Fine Arts in San Francisco, New York’s Lincoln Center, and the world’s oldest indoor concert hall, Teatro Olimpico in Vicenza, Italy.

Often featured on National Public Radio, Frank Vignola has also become a familiar figure on Public Television, featured previously on three popular shows, including the heavily programmed Tommy Emmanuel and Friends. His own PBS special, “Four Generations of Guitar” produced by Peter Berkow, premiered in the 2015 season as part of the 13 episode series “Music Gone Public”, where they were joined by special guests Bucky Pizzarelli, Joe Craven and Tommy Emmanuel.
Frank Vignola