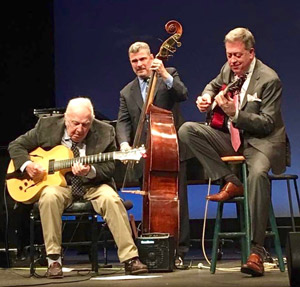 The Bucky Pizzarelli and Ed Laub Duo have been performing for the past 14 years, after a lifetime association as teacher/student. As a duo they perform for audiences all over the US and Canada in clubs, concert halls and jazz festivals. They combine instrumental and vocal arrangements with an emphasis on the Great American Songbook, as well as some of the classic 1930s guitar duos made popular by Carl Kress / Dick McDonough, Eddie Lang, and George Smith.

Their great friendship of over 47 years is evident in their sound, and the way they interact together on stage.

Bucky Pizzarelli – Born in Paterson, NJ in 1926, Bucky is a world-renowned jazz guitarist. His career spans over 70 years, from the Vaughn Monroe Orchestra to the Johnny Carson Tonight Show. Hundreds of jazz concerts worldwide, including White House performances with Benny Goodman, Frank Sinatra, and Claude “Fiddler” Williams, with Presidents Reagan and Clinton add to the list.

His numerous worldwide tours also included performances with practically every jazz legend, such as Stephane Grapelli, Slam Stewart, Tal Farlow, Rosemary Clooney, Zoot Sims, Benny Carter, Michael Feinstein and Charlie Byrd, to name a few. He has hundreds of jazz recordings with every major jazz great, including his own solo albums and work with his two sons, John and Martin Pizzarelli. He is on the soundtrack of Woody Allen’s Sweet and Lowdown and has appeared on PBS with Les Paul and Tal Farlow, The New Jersey Jazz Guitars (Filmed at Rutgers University).

Last year, Bucky became one of the very first musicians in New Jersey to have two of his guitars, along with a recorded history of his lifetime in music, inducted into the Smithsonian Institute in Washington, D.C. In 2011 Bucky was inducted into the New Jersey Hall of Fame, and in 2012 recorded with Paul McCartney on his latest Grammy Winning Album, Kisses On The Bottom.

Ed Laub is a locally renowned guitarist and vocalist, whose style has been compared to a blend of Kenny Rankin, Chet Baker, and James Taylor; with a guitar style similar to his mentor, Bucky Pizzarelli. Ed says, “that’s not bad company to be associated with. They were amongst the artists to whom I listened and was most influenced by. I guess I would say I am honored with that comparison.”

Because of Ed’s talent as an accompanist, and the fact that he is one of the more accomplished 7 string guitarists, he is sought after by many of the top guitarists in the NYC metropolitan area… to back them up and add a pianistic style that makes any duo sound more like a trio. Focusing mostly on the American Songbook genre, Ed also loves to perform the great Brazilian classics using a nylon 7-string guitar.

Born in northern Bergen County, New Jersey in 1952, Ed grew up in a family of musicians; and his one uncle was an accomplished organist/arranger, who spent many years with Mitch Miller and the Fred Waring. There was always live music at family gatherings, and the desire to be part of that encouraged Ed to pursue learning an instrument. After abandoning the trumpet and the piano, the February 1964 performance of the Beatles on Ed Sullivan’s show was the catalyst to taking up the guitar and singing.

In 1966 Ed had the good fortune to study with a marvelous guitarist and banjoist, Bobby Domenic (uncle to jazz legend, Bucky Pizzarelli), and ultimately a few years later in 1969, study the 7 String guitar with Bucky. Ed graduated from Fairleigh Dickinson University with a degree in music and business, and maintained a dual career in both his family business and as a musician in a variety of bands.

13 years ago Ed became the steady partner to his teacher, hero, and close friend; Bucky Pizzarelli. They now travel all over the metropolitan area and major cities in the US, playing in clubs, concert venues and jazz festivals. All About Jazz Magazine said, “Pizzarelli is the complete jazz musician, and Laub complements him perfectly!”

Martin Pizzarelli is a renowned double bassist known for his work with his father, legendary guitarist Bucky Pizzarelli; and brother, guitarist and singer John Pizzarelli. He grew up in Saddle River, NJ, where at a young age he became accustomed to weekly visits from Benny Goodman, Teddy Wilson, Zoot Sims, Clark Terry, Sonny Stitt, and Ray Brown. Martin, along with his brother and pianist Ray Kennedy, famously opened for Frank Sinatra’s world tour in 1993. Since then he has endured a remarkable tour schedule of roughly 200 dates per year throughout all corners of the globe. TV appearances include Jay Leno, David Letterman, Conan O’Brien; with venues ranging from Carnegie Hall to the Blue Note Jazz Club. He has worked with the Boston Pops, New York Pops, San Diego Symphony, Dallas Symphony, and New Jersey Symphony orchestras. Martin has also often worked with jazz pianist Monty Alexander and Daniel Jobim, the grandson of Antonio Carlos Jobim. In 2004, he released and recorded his own trio CD with Bucky Pizzarelli and Ray Kennedy, and has appeared as a sideman on over 30 albums.

“The grace, profundity, and wit that attend the playing of the eighty-nine-year-old guitarist Pizzarelli are an outgrowth of the literally thousands of gigs and recording sessions he’s participated in. This acknowledged dean of mainstream jazz has developed a fine rapport with the guitarist Laub, a familiar duet partner. Between the two of them, they have fourteen strings for making exquisite music, as each plays an atypical seven-string guitar.” –The New Yorker Magazine, April 2015
Bucky Pizzarelli