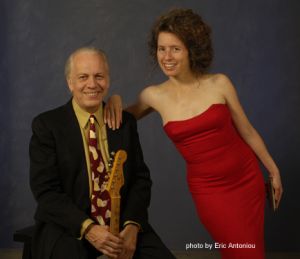 When 22-year-old harmonica ace Annie Raines first sat in with 42-year-old country blues guitarist Paul Rishell in a Boston bar in 1992, few in the crowd suspected that they were witnessing the beginning of a musical partnership that would span the next fifteen years and counting. As a working team, Paul and Annie have racked up hundreds of thousands of miles on the road in the U.S. and Europe, collaborated on original songs, and released I Want You To Know (Tone-Cool/Artemis 1996), Moving to the Country (2000), the W.C. Handy Award winner for Acoustic Blues Album of the Year, and Goin’ Home (2004), which was nominated for two Handy Awards.

Last October they released their first live album, A Night In Woodstock. It is an eclectic, high-energy set of acoustic and electric originals and classic blues songs.

The live band consists of Paul Rishell on vocals and guitar, Annie Raines on vocals and harmonica, Chris Rival or Troy Gonyea on guitar, Reed Butler on bass, and Billy MacGillivray on drums.

“There must be some physical explanation for the sheer joy they bring to the blues… lots of heat but also plenty of subtle variation under the theme.” –Chuck Young, Atlantic Monthly

“W.C. Handy Award-winners Rishell & Raines are rousing interpreters of country blues, the original acoustic style that gave birth to electric blues, R&B, and rock. While their guitar, harmonica, and vocals are roiling, muscular, and masterful, their shows are down home-friendly and fun-loving.” –Scott Alarik, Boston Globe