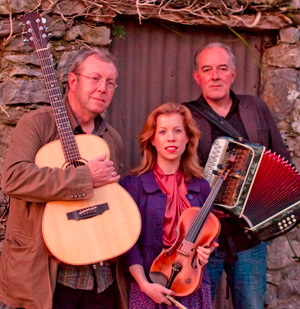 Andrew Mac Namara’s individual style of playing traditional Irish music is both true to his heart, and to the area in which he was reared. He was born in Tulla, located in County Clare, Ireland, and learned the strong traditions of East Clare music from older players such as Joe Bane and Bill Malley. In his late teens he joined the highly esteemed Tulla Ceili Band in which he toured both nationally and internationally for a number of years.

He was a founding member of the group Skylark, and recorded two albums with them before forming his own band called The Lahawns’, and then recording two further albums with them (“Live at Lena’s” and “Live at Winkles”). He has also recorded an album with his sister Mary Mac Namara (called “Open Heart”). His solo albums include “The Dawn” and “No Compromise”. More recently he has toured in the UK, Europe, North America, Australia and Japan.

Andrew’s solo performances and collaborations are unique and listeners are never disappointed. He has the knack of electrifying audiences and this is evident on both his collaborative projects and his solo albums.

For this concert he will be joined by Orla Harrington and Ged Foley, presenting the proud musical heritage of East Clare. It’s a superb combination that never disappoints the listener. The discovery of a reel to reel tape recorder and tapes in the attic of the Harrington household in south east Clare was the inspiration for their new album Flagstone Memories. This lovely recording with Andrew, Orla, and Jim Higgins, illustrates how the past and present can be seamlessly interwoven to result in superlative music. With Ged Foley filling in for Jim on this tour, another dimension of rich musical heritage is added.

“Mac Namara has a nice way with the tunes, finding lots of nice twists without falling into gimmickry!” –P. Varlet, Celtic Grooves