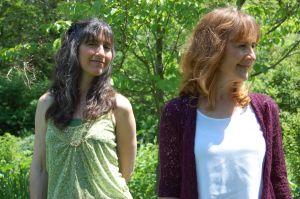 Amy Fradon and Leslie Ritter will be the Rosendale Cafe’s Harmonic Valentine’s once again. This critically acclaimed, Hudson Valley duo has been thrilling audiences with unique and stellar harmonies for years. They are joined by their amazing band, featuring Cathie Malach on keyboards, Ken McGloin on guitar, and Eric Parker on percussion. Amy and Leslie and their band make music that is a rare treat, filled with power and nuance, and brimming with heart. The show starts at 8:00pm but come early to eat the wonderful food at the Cafe, and make sure that you get a seat. If you have never heard Amy and Leslie sing together, this is a must-see concert and no better way to celebrate love!

Amy Fradon is well-known for her sweet and soaring vocals and heartfelt songwriting. She has a wide range of styles, and has been compared to Joan Baez as well as Aretha Franklin. Amy has been a successful session singer and has toured extensively with various theatre and music ensembles, including Pumpboys and Dinettes, the Vananver Caravan and Face the Music. She has three critically acclaimed, solo, self-produced CDs; and is the creator of the Vocal Visionary Voice Work, helping people to discover confidence and freedom through the voice.

Cathie Malach is a pianist as skilled at supporting the musical aspirations of others as she is at taking the stage for her own; thriving in diverse musical genres, from improvisational music for the healing arts to rock and roll to folk. Keyboardist, composer and singer; Cathie is known for her evocative, memorable melodies; sensitive keyboard work that is at turns lush, sparse, percussive and exuberant; and compositions full of emotional dynamic and revelation – echoing influences from Elton John to Keith Jarrett. Cathie has composed and recorded several albums with poet and lyricist Kim Rosen, and collaborated with such artists as Peter Kater, Chris White, David Darling, Paul McCandless, Amy Fradon, and Leslie Ritter.

Ken McGloin got his first guitar at the age of 12 and has been a working musician since the age of 14. Heavily steeped in the blues and rock and roll, Ken’s primary focus shifted towards Jazz while he was in high school, and then even more so once he entered the prestigious University of Miami music program. Ken’s music education included master classes with jazz greats Dave Holland, Larry Coryell, and John Abercrombie. Ken is an accomplished and virtuosic player, able to play many styles with an authentic feel and appreciation of what makes each valid in its own way. His “hard-core alternative” band, Lunchmeat, played the main stage at the 1994 Woodstock Festival. He also writes music for TV and film and has had his music featured on MTV’s “The Real World” and “Road Rules”, as well as on The Oprah Winfrey Show and the ESPN Network.

Eric Parker is an internationally acclaimed drummer, producer and composer who hails from a family dynasty of accomplished drummers. He has recorded and toured with a diverse group of artists over the years including Joe Cocker, Steve Winwood, Bonnie Raitt, Little Feat, James Taylor, Pete Townshend, Orleans, Madonna, Carly Simon, Bob Dylan, Rick Danko, Todd Rundgren, and Loe Reed; to name only a few from his long list of credits! He composed the top forty hit “Crazy (keep on fallen)” and “Ramona” for Cornell Dupree, which was the Newport Jazz Festival TV/radio theme song 3 years running. Eric has also composed music for VH-1 and The Travel Channel along with 27 other published compositions. Eric produced many projects in New York City through the eighties, before later moving back up to Woodstock, where he continues to be an in-demand session player, bringing his versatile drum and percussion skills to a wide variety of musical projects.

Due to the expected high turnout for this event, and the Cafe’s first-come-first-serve policy, audience members are encouraged to come as early as possible for seating.

“An acoustic duo from the Hudson Valley reunited… and played like they had never been apart a day …Amy & Leslie’s heavenly blend was always their calling card and in Albany, that was not diminished one iota. Looking casual and comfortable… it was simply captivating.” –David Malachowski, on Amy and Leslie’s reunion performance in Albany, from http://TimesUnion.com/
Amy Fradon