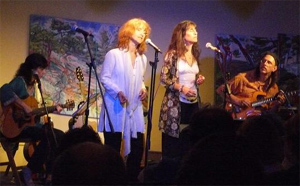 The luscious vocal harmonies of Amy Fradon and Leslie Ritter made them coveted session singers in the early 1980s. Their vocals were heard on recordings by Orleans, Rick Danko, John Sebastian, the Fabulous Rhinestones, and Happy and Artie Traum. As an independent duo, the two singer-songwriters collaborated on six albums during the nine years that they worked together.

In this special Cafe performance, they will be joined by the accomplished Scott Petito and Helen Avakian.

Amy Fradon, whose parents are both well-known cartoonists, was the prime songwriter and lead vocalist of the duo. A native of New York, Fradon initially pursued an interest in modern dance, studying choreography at New York University. Auditioning for the school’s folk music coffeehouse, the Rathskeller, on a whim, she was hired for her first musical performance. Moving to Woodstock, New York in the mid-1970s, Fradon sang harmony in a band of session players including Robbie Dupree, Cane Roberts (the Alice Cooper Band), Eric Parker (the Joe Cocker Band) and Gary Bonner (Scott Petito).

Scott Petito is a Grammy nominated composer and producer. His NRS Recording Studio has been a popular destination for acoustic and jazz artists for many years. Scott is a gifted bassist and multi-instrumentalist who has performed on hundreds of recordings in many musical styles. James Taylor, The Band, Dave Brubeck, Jack DeJohnette, and Keith Richards are only a few of the many artists with which Scott has worked. Scott is also a member of the legendary band The Fugs. The Fugs’ song “C.I.A. Man” was recently featured in the Coen brothers’ latest movie “Burn After Reading.” The Fugs will be releasing a new CD before the end of this year. – http://ScottPetitoProductions.com

“An acoustic duo from the Hudson Valley reunited… and played like they had never been apart a day …Amy & Leslie’s heavenly blend was always their calling card and in Albany, that was not diminished one iota. Looking casual and comfortable… it was simply captivating.” –David Malachowski on a recent Albany performance, from http://TimesUnion.com/
Amy Fradon