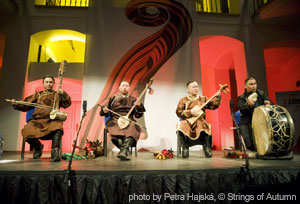 “Imagine a human bagpipe – a person who could sing a sustained low note while humming an eerie, whistle-like melody. For good measure, toss in a thrumming rhythm similar to that of a jaw harp, but produced vocally-by the same person, at the same time.” –Newsweek