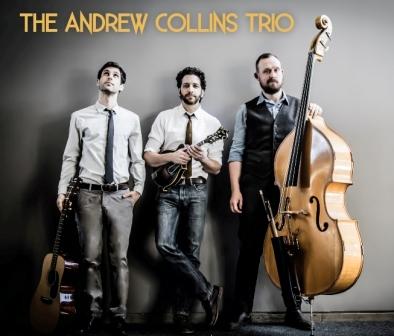 This mercurial mandolinist finds himself – through no actual fault of his own – at the epicentre of Canada’s burgeoning acoustic/roots music scene. He didn’t invent it – but he’s certainly a major contributor, having co-founded seriously noteworthy Canadian bands like the Creaking String Quartet, the Foggy Hogtown Boys and, more recently, his namesake Trio.

As he gathers up innumerable awards and nominations by these various ensembles, Collins, who’s comfortable on mandolin, fiddle, guitar, mandola and mandocello – is zeroing in on the work he does with his beloved trio: fellow string guru Mike Mezzatesta, whose versatility shines through on guitar, mandolin, fiddle and mandola, and in-the-pocket James McEleney, holding it down on the bass, mandocello and vocals.

Showcasing a popular collision of trailblazing roots, folk, chambergrass and jazz, not to mention a dizzying number and energetic interplay of instruments on stage, Collins and Co. appear to live by the old adage, “idle hands are the devil’s workshop” likely keeping them just ahead of his grasp.

Andrew’s career as a solo artist is no less impressive. The Central Canada Bluegrass Association nominated him five times as Mandolin Player of the Year, which he secured in 2005.  His debut solo album, Little Widgets (2005), is a self-produced collection of genre-bending originals that earned him a Canadian Folk Music Award for Pushing the Boundaries in 2006. In 2007, Andrew took a different track and collaborated with world-renowned Celtic musician, Brian Taheney, to release Mando Lore, an all-traditional, all-mandolin-family compilation of Celtic and Old Time gems.  His follow-up solo album, Cats and Dogs (2011), continued to build his catalogue of feisty originals, garnering a JUNO and CFMA.

Taking musical cues from David Grisman, Andrew, now joined by Mike and James, have ventured even further down the path of Trailblazing Roots and beyond – melding multiple genres while tastefully showcasing each of their boundaries – all towards extrapolating brave new musical worlds.

The concert will showcase tunes from their award winning repertoire plus their new double album (one vocal / one instrumental), cleverly called “tongue and groove“.

“Light of touch, fast of wit, copiously imaginative, and a musical scholar of the highest distinction, Canada’s mandolin virtuoso pulls out all the stops”
Toronto Star

“To call Andrew Collins a master of the mandolin would be putting it mildly – 4/5 stars”
Exclaim! Magazine

“The concert was exquisite and everyone left smiling. The Trio is quite extraordinary!” Robert Bouley, Stone Church Arts, Bellows Falls VT “Andrew Collins Trio, tunes, skills, humor, class, what else can you ask for? The musicianship is spectacular and the gents were a pleasure to host!” Tom Bianchi - The Burren Backroom Series, Somerville MA / The Bebop Boston MA