Recognized by Chronogram Magazine as Best Vegetarian Restaurant and Best Performance Space, we also received a four star rating for food and value in the Poughkeepsie Journal.

Susan Dorsey Morganstern moved with her family to Rosendale, New York in 1990. She explored the village and stopped in at a little shop on Main Street, aka Route 213 West. It was called Junk and Foibles, and it was located in the old Astoria Hotel, now the vibrant 1850 House. The space was formerly a tea room where, in the day, miners danced with ladies and drank tea and high octane beverages like Miner’s Punch. The woman who ran Junk and Foibles featured antiques, tea, of course, some cool music, and poetry. But she was ready to move on to other adventures. Susan immediately offered to rent the space, and did. When she told her husband, Mark, that she’d rented the space, he said a very pointed, “Why?” She responded that the town needed a little coffee shop. There should be more than just a Stewarts Bread and Butter shop over on Route 32. She imagined she’d be brewing coffee, chatting with folks, and perhaps offering some homemade baked goods. But that’s not what happened.

Up until that point, Susan, a graduate of Montclair State College with a degree in Dance and Speech, had done a long stint of waitressing at an Irish pub in Nyack, New York. That was the extent of her experience in the food industry. As Susan prepared the vacated room for its next incarnation, woman with various skills and interests appeared to help her. And on September 3, 1993, The Rosendale Cafe opened to a local public with a voracious appetite for more than just coffee and lemon squares. There were demands for lunch and dinner items and an expanded array of desserts. And so, Sue and her crew went into high production and started cooking and baking full time. And the cafe started filling up almost full time. What began on a whim was suddenly a full tilt, bustling eatery.

Susan decided that some live entertainment for her quests would be in order and she suggested that Mark could book some musical acts into the room, seeing as he’d previously worked as a freelance musician in New York City. Still surprised and shocked at the success of his wife’s little cafe, Mark invited local musicians to perform on the weekends. The combination of food, vegetarian and vegan, with the occasional turkey dog, upped the ante, and the small fifty-seater space was packed on the weekends. On music nights in the summer, people literally leaned into the open windows to listen.

In 1998, having completely outgrown the cafe space in the hotel, and the fortunate coincidence of a building becoming available directly across the street, Susan decided to buy it and move the operation to a larger venue. After a period of renovating and retrofitting the cafe reopened at 434 Main Street, nestled in front of Joppenbergh Mountain, and the Delaware and Hudson Canal, Rosendale’s famed historic landmarks. It’s just down the way from the great train trestle, aka, the Iron Wonder built in 1872, used to carry out the natural cement product mined in Rosendale.

As the cafe enters its twenty-fifth year of existence, it remains a community gathering space just as it began. Susan, Mark and their crew look forward to serving all the new friends who’ve discovered the little cafe on Main Street. 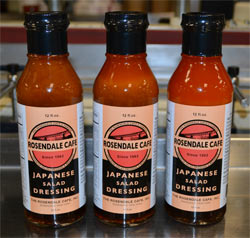 The Rosendale Cafe’s popular Japanese salad dressing is now available for purchase at the cafe and in stores. Made from fresh and simple ingredients like ginger and tamari, it’s gluten free and vegan. Take home a 12 ounce bottle for $6.